Meet DJ Switch: a 10-year-old girl from Ghana who wants to be a gynecologist when she grows up.

Erica Armah Bra-Bulu Tandoh rose to international fame through a mixture of her feisty attitude, online music videos and total cuteness. “I came up with the name DJ Switch because when I was a kid I was switching up the mood of people. When you’re sad I’ll make you happy, when you’re happy and you want to be more excited, I’ll make you excited,” she says.

The second child and only girl of Ghanaian parents with five children, she and her family live in Dadieso in the Western region of Ghana. She learned how to DJ roughly a year ago, in a village bar where the local DJ taught her how to use a laptop. After a couple of days learning the basics of playing on decks, “he’s teaching me what he knows and I’m teaching him what he doesn’t know,” she says. 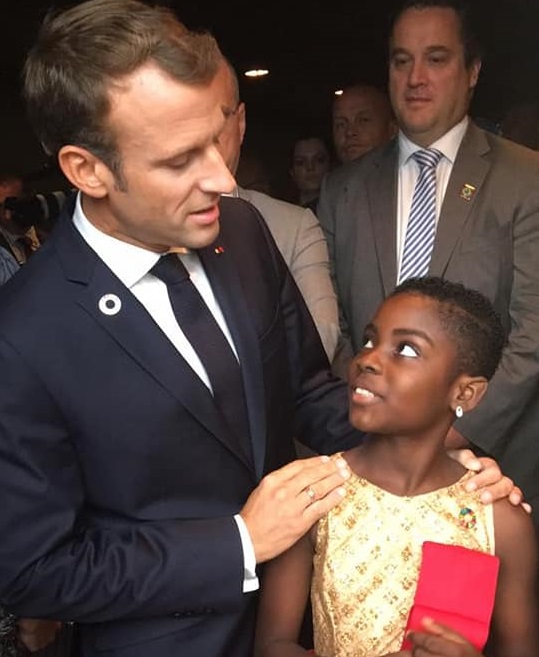 Asked if she felt nervous DJing in front of numerous world leaders, in her first trip outside Ghana, she says, “I never feel nervous playing in front of any capacity of crowd because I’m focused.”

“I make my mind up that what I’m going to do, I’m going to do with energy and also attitude to make the crowd happy and I make myself confident not to feel nervous, because I don’t feel shy. I always take nervous and giving up out of my dictionary.”

That’s her message to other young people around the world. “Never feel nervous. Be focused on whatever you’re doing. You don’t need to let shyness be in your dictionary.”

Even at 10, the schoolgirl is a fierce advocate of education. “I love school, I don’t want to joke with my books because I have a dream of being a gynecologist.”

“Education is the key to success” she adds.

“I want to be a gynecologist because you know women got to support women. I want to help women deliver and I want to make deliverance so easy.”

However, she’s determined that gynecology won’t get in the way of her DJing. “I wanna be a very big DJ and my goal is to combine DJing and a future as a gynecologist. … Let’s say in the future you come to my hospital and you want to deliver and I’ll just be playing some music and you’ll see your baby dancing while it’s coming.”

Our favorite part of the AMVCA’s!!!

What Does Your Style Say About You?

Black Panther: Keeping up with the Wakandans

Must Watch Movies For Black History Month on Netflix